Roger took us on an extensive, albeit sometimes jumbled, tour of his new
release on Tuesday Morning. I had seen a demo of it at the MacKiev booth a NECC the day before and it was wonderful.

For those of you who remember HyperStudio, you will be reacquainted with a long lost friend. HS is designed using the screen-by-screen format (didn't catch if they are still using the Card/Stack metaphor in 5.0.) Anyway, thumbnails of sequential cards can be streamed down the left side of the screen. Floating toolbars are more sophisticated because of the extensive palettes that appear instead of dropdown menus.

A wonderful addition that I saw involved editing drawing and painting efforts. You might remember in the earlier versions of HS, If you wanted to move something that you painted on a background, you had to marquee the object and then you moved the object AND any included background. What a
mess!!!!

HS 5 considers ANY creation as an individual object. This means that you can grab it, move it, rotate it, expand or contract it. It's a whole new world for editing.

The new HyperStudio is strong when considering the video and Web 2.0
opportunities. You can import videos into your project with relative ease.
Your video can include movie files as well as live feeds where you program
is encompassing direct, live video feeds from cameras connected directly to
the computer. This is just like HS 3.0 The NEW addition allows you to link
live webcams into the program. This wasn't completed when I saw it, but
they said that there would be a set of "approved" webcams that would be
allowed to link. Interesting.

On the output side, Roger was amazing us with the Podcasting capability.
This option wasn't ready for demonstration, but it appeared that you could
export your project to a video that could be podcasted. It would include
the RSS code but you would have to find a site where you would post it. I
don't think that this is officially a podcast because those are usually
limited to an audio file, it's more like a vodcast.

Why was I getting up at 5:45 AM for 7:00 breakfast at the Omni Hotel sponsored by the KievMac software company? It was because Roger Wagner would be there to unveil HyperStudio 5.0.

You might remember HyperStudio. It was a multimedia authoring tool that Roger Wagner (then a 4th grade teacher in San Diego) developed back in 1986. He wanted a user-friendly system that 9-year-olds could use to create programs that were filled with images, text, sounds and animation.

Roger began the HyperStudio company and matured HyperStudio on the Apple IIgs and then onto the Macintosh and Windows platforms. It was a wonderful programming language that was used in k-12 schools throughout the world. We used it for our Educational Media classes to provide a relatively easy way for students to create multimedia programs.

In 1999, Roger had the good fortune of selling his HyperStudio company to The Learning Company for millions of dollars. This was fortunate for Roger but highly unfortunate for the rest of the world. The Learning Company tried to update HyperStudio to version 4.0 and the program imploded around its faulty code. This was so disastrous that schools, teachers and kids dropped this fallen albatross for the likes of mPOWER and PowerPoint.

Even amidst the shards of HyperStudio, Sunburst Software purchased HyperStudio from The Learning Company - Talk about a Fire Sale . . . They decided to rewrite the program from the ground up. Apparently, they enlisted the services of MacKiev. This is a software programming company in
. . . Russia of course.

Last November, Sunburst flew me over to Chicago for a day to consult on some upgrades that they were considering for their keyboarding software. I found myself in the car with a man who informed me that they were working on HyperStudio but they are just trying to settle some ownership rights issues.

Well, apparently, rights were settled last Friday when Roger Wagner signed on the dotted line to purchase the program and then market it through MacKiev. I don't know what the agreement is, but I DO know that they are promising to release HyperStudio 5.0 by September.

I have spent this entry explaining the background of HyperStudio but didn't say much about the program. Don't want to make this posting too long, so I will continue with this next time.

NECC 2007 - Expanding Your Classroom with the Interactive Web

I assume that if you are reading this, you are probably in my NECC workshop entitled "Expanding Your Classroom with the Interactive Web."

Instead of creating CDs or killing a lot of trees to provide you with notes of resource addresses for this workshop, I am providing these links to site here on my blog. It's quicker, it's easier, AND you can access them with the click of your mouse.

We will discuss the basis of the Interactive Web (AKA "Web 2.0" but I can't use that term here - it is copyrighted ;-)) We will then explore the educational possibilities of using blogs, wikis, podcatching, podcasting and social networking software in the classroom. By the end of this workshop, if all goes well, each of the attendees will have their own blog, wiki, podcast and del.icio.us accounts.

Here are the resources that we will be using. I am posting this here to share it with you readers, but also so that my students will be able to link to them from this posting instead of having to create a whole different website. (pretty cool, eh?)

Create Your Own Blog
Blogger - Quick and easy blogging spot.
WordPress - Takes a little longer, but includes tagging and couple of other treats. It's worth the extra time.

Wikis
Wikipedia - The encyclopedia created and edited by "the masses".
Dr. Z's ITEC Conference 2006 Wiki - Check this out for more . . .
Posted by Leigh at 1:17 PM No comments:

Reality in Second Life at NECC 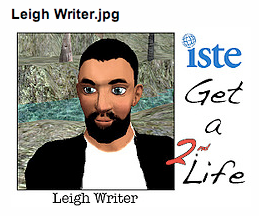 I am sitting here in the Cedar Rapids airport at 5:40 AM waiting for my aerial coach to whisk me off into NECC-land in Atlanta, GA. This is my annual trek to the NECC(a) MECCA of educational computing.

A new dimension has been added this year with the ISTE Second Life experience. I am not enrolled in any SL activities yet, but learning about SL and the instructional opportunities of the Virtual Worlds will be one of my quests over the next 6 days.

The beginning of the SL integration into the NECC RL experience is the inclusion of SL nametags. An industrious member, Know Clue, has accepted the job of taking member-submitted photos of SL members and turning these into Nametags. http://www.flickr.com/photos/knowclue/page2/

You will see my photo/nametag in this entry. Looks just like me, eh?

Remember the mantra of Second Life, "On the Internet, Nobody knows you're a dog."
Posted by Leigh at 5:51 AM 1 comment: