Have you heard that Bill Gates is giving $5,000 to Facebook users who click on a share link? I got it in my email, so it must be true, right? Well, thank goodness for sites such as Snopes.com that can either confirm or debunk many of the urban myths going around the Internet. (And no, Mr. Gates really isn’t giving money away to Facebook users).

Okay, maybe that was an easy one. Well, have you heard that the reason school districts are implementing 1:1 programs is to “keep up with the Jones?”  In my position as Director of Information and Technology Services at AEA 267, this is a belief I have often heard expressed.  Unfortunately, Snopes.com can’t tell me if this is true or not. And this is important for me to know, as the reasons and expectations schools have for implementing 1:1 programs give direction to the work of the AEA in the support of schools. So in the fall of last year, I went on a trek to visit a number of superintendents in Iowa to explore what factors influenced their decision to implement a 1:1 initiative.

I asked all the superintendents I interviewed if “keeping up with the Jones” was a reason they implemented their program.  They discounted this as a factor, although a few didn’t seem to mind that they had a 1:1 program and their neighbor did not.  Even given that nod to a bit of competitive school pride, I concluded this was not a factor in their decision.

I also wondered how enrollment trends of the district influenced the decision to implement a 1:1 initiative.  I thought that an initiative might be part of an effort to attract more students from surrounding districts and retain the students the district already had.  This was akin to a “getting ahead of the Jones.”  All but one of the districts had experienced declining enrollment in the past five years.  Enrollment ranged from a one-student gain in five years to 20% fewer students in the same timeframe.  Even then, this was a minor factor at most.  While some superintendents felt it couldn’t hurt, none used a 1:1 initiative in an effort to attract and retain more students.

A possible factor that puzzled me was how in a year of 10% across the board budget cuts to the general fund and a year of zero percent allowable growth, districts were moving ahead with 1:1 initiatives, without apparent budget concerns. The answer to that was the two-fold.  Almost all the superintendents I interviewed used proceeds from the one-cent sales tax to fund the program.  The other source of revenue was the PhysicalPlant and Equipment Levy (PPBL).  Both of these revenue sources largely escaped the hits that the general fund experienced and were available for 1:1 initiatives. With a steady source of funding, budget was not an issue.

So in the interviews I conducted,  “keeping up with the Jones,” attracting students from neighboring districts, increased student achievement, and budget were not really factors in influencing the superintendents to implement a 1:1 program.  So what factors did influence them? I’m no Snopes, but I’ll share with you what I discovered in the next edition of this blog.

What is your opinion on why schools go 1:1?

Jerry Schnabel is the Director of Information and Technology Services at AEA 267 in Cedar Falls. He may be reached via email at: jschnabel@aea267.k12.ia.us

Posted from Diigo. The rest of my favorite links are here. 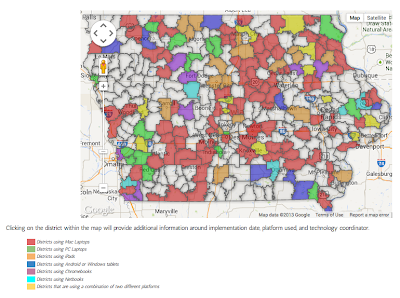 Above is a map of the school districts and the brands/types of computers they were using as of the 2012-2013 school year. It appears that there are more Mac laptops and iPads than any other brand. This may change over time. I understand that there are a number of districts that have decided to invest in Chromebooks.

NOTE: The map above is a screenshot of the interactive map that is available on the Iowa Area Education Agencies website. Link to the active page, and you will be able to Click on the district within the map to get additional information around implementation date, platform used, and technology coordinator. There is even a link to a spreadsheet with the specific data.

Over the next few weeks, I plan to write (and have guest authors write) about some of the 1-to-1 activities in Iowa.  We have a burgeoning 1-to-1 culture in Iowa schools and it will be fascinating to see what we uncover.

Are you doing 1-to-1 and how is it changing what you do in your schools?