How to Combat Griefing 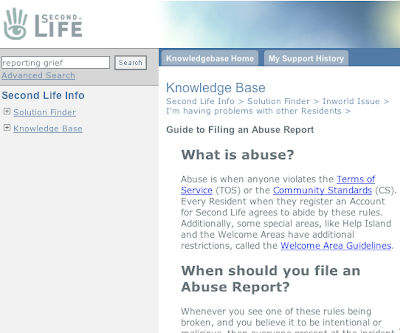 This is a continuation of an earlier posting where I told you about begin griefed (also known as a strong-arm robbery.)

I don't want to sound like a whiner, because there are many things worse than having a rude Italian (see earlier posting) invade your house and demand money. But I want to share some of the things that I have found out about griefing. Many you can post some of your own ideas as comments.

Griefing is, in simple terms, harassment. It can come in all forms from "just talking badly to you" to "caging you" to "shooting you". The important thing is to know what to do when you have been bothered.

The first thing that you need to do is document the happening. I know that it's annoying to have to think about documentation when you are being bothered, but it will pay off in the end. You need to document by taking a photo of the happening. Take a snapshot so that you have proof of it happening and you have the offender's name. This can be used for later actions.

Taking a Photo: Just go up to the File menu and select "Take a Snapshot." This will complete a screen capture that will save to your desktop.

Sit Down: One of the things that griefers can do to you to harass you is to "Cage you." This means that they actually put a cage around you and then they can spin you, fly you or just detain you. Apparently, none of this works when you are sitting down. So if someone begins to harass you, you might want to just take a seat. No chairs around? Either create a box or have sit on a chair that is in your inventory.

Get Out of There: Griefers are there because they want some attention. Vacate the premises and there won't be a reason for them to be there. The easiest way is to hit the "Teleport Home" button under the World menu. But even if you don't go home - go somewhere else. Stay there 5 minutes and then return. 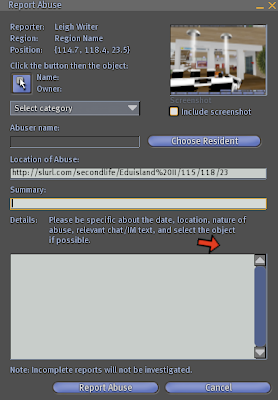 Report the Incident: Second Life has a system for reporting abuse. Go to the Help menu and you will find a Report Abuse selection. This will bring up a report screen that will provide you a place where you can fill out the details. I haven't reported last night's incident yet, but I can do it today if I wish. It appears that I just need to tell them the location and the approximate time and the investigating committee can open the scripts to find out what was said and to verify what happened. They will then act accordingly. You can find out what happened by checking the "police blotters" a little later.

While this is indeed Second Life in a Virtual World, no one has the right to invade your privacy or take things from you. This is true in Real and Virtual worlds. Following these steps for dealing with such actions are good practice for whatever world you inhabit.

I have been Griefed!!!

It never rains in Second Life and we never have to worry about crime, right?

I was in our Ed Central Center in Second Life the other night when an individual came into our house and said "Give me something to do. I need some money." Taken aback, I talked with him. He claimed that he needed money to get a motorcycle like I had. (I don't have an SL motorcycle but found one parked outside our house a little later.) He said that he needed this motorcycle to get a job.

I don't remember his name but I did find out that he was Italian. I asked "Why are you being so aggressive about getting this money?"
"Because I am Italian," he replied.
"Does that give you an excuse for being so rude?" I queried.
After that, he was still insistent but prefaced each of his demands with "Please".

I just wanted this guy out of my life so I gave him a 4-wheeler car that I got for free at a freebee SL site. He left with this, only to return a couple of minutes later asking how to get it to work.

After he left, I realized that I felt violated. This guy had come to my house demanding money and I paid him off to get out of my life. Do I feel unsafe in SL? Not really. My SL account could disappear and my Real Life wouldn't be any the worse for it. But I AM somewhat concerned about the safety of the stuff that I have been working on in SL. It isn't the value of the stuff in the sense of money, but the time that I have spent developing the environment in which we live.

What should you do when you are being griefed? I will discuss this in my next posting.
Posted by Dr. Z at 6:24 AM No comments: