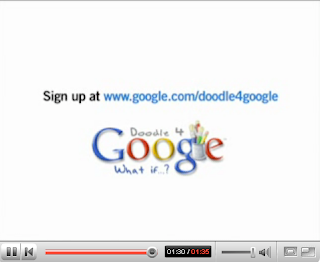 There is a video on YouTube that introduces you to the guy (Dennis Hwang) who draws the various thematic title pages for Google. It shows a time-lapsed video of him creating one with a couple of mice on it.

When he is finished, he tells you about the contest for k-12 schools. Kids can sign-up their schools to participate. The winner's doodle will be shown on Google for a whole day.

Technology Does Make a Difference!

Recently I was reading our local paper, The Waterloo-Cedar Falls Courier, when I found an article reviewing a recent lecture given by Dr. Michael Bugeja. Dr. Bugeja is the director of the School of Journalism and Communication at Iowa State University. He seems to be a well-published author, but he seems to be on a one-man crusade against using technology in education.

As you might guess, I didn't agree with him on most of his ideas. I had listened to him on our local Iowa Public Radio station a few months ago and didn't agree with him then either. In fact, I called into the station to talk with him. We had just gotten the discussion going when the engineer at the station disconnected me. I was later assured that it was an accident.

Anywho, I read this article about a speech that he gave at the University of Northern Iowa and decided that I needed to share my side of the argument as well. Below you will see the letter to the editor that I wrote. I found writing this letter terribly therapeutic in many ways. I got to relieve my pent-up frustration from seeing this ludite educator receive all of this press. I also had a chance to share ideas about technology's role in education.

I hope that you like my letter and will share your insights with me. Better yet, if you DON'T like it, respond with where you think that I went astray:

I am writing in response to Dr. Michael Bugeja comments as he “railed against the infusion of technology in the classroom.” I didn’t attend his hour-long talk that was covered in the Courier on Saturday, April 26, but I DID hear his interview on KUNI a couple of months ago on The Exchange. At that time he said that technology in the classroom was unnecessary. It was an unneeded expense for students and schools. He said that a good lecturer could make a teacher-based lesson engaging and that we didn’t need technology for that.
Admittedly, a good lecturer can be riveting. Descriptions of events can be useful. But how can a verbal description of Tiananmen Square replace a video of a single individual confronting a cavalry of tanks, which is easily accessible on YouTube. (http://snurl.com/25wql) How can it equal using Google Earth to transport the class to an interactive birds eye (and somewhat 3-D) view of Tiananmen Square? How can it match the impact of using a video conferencing program, Skype, to actually talk with someone in China who was at that monumental confrontation in 1989?
It can’t.
Our world is permanently linked. We have the opportunity to connect our classrooms with the rest of the world in a way that has never before been available. We have the resources that can turn the traditional didactic teacher-based instructional format into an interactive student-based learning experience that will enable our students to be active participants in our global society.