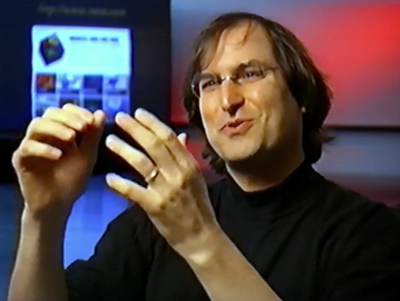 Steve Jobs was one of the most fascinating people of the 20th century. He was a visionary, marketeer, designer, and self-proclaimed hippie (see the end of the video.)

I just wanted to share with any Jobs-Heads out there that last night I found a 1995 video, Steve Jobs: The Lost Interview, on Netflix.
It was terrific!!!!!

This 72-minute video takes place when Jobs wasn't employed by Apple.  He had been released from employment by John Scully and was running his new computer company, Next.

I found the video absolutely fascinating. Jobs talked about using a computer when he was 10 years old. He led us through his whole developmental process from creating a "blue box" to creating and marketing the Macintosh.  The greatest part of this video is that it provides insight into how Jobs thought and what he valued.

Robert X. Cringley led this 1995 interview. I have been a big fan of Cringley as well since the early 80s.

Hope you enjoy this video. Tell me what you think.