Simon Pierro brings his genius to another iPad-dish demonstration of Digital Prestidigitation. I am continually amazed by Simon's ability to find the mystical powers of his ipad and share them with eerie Halloween wonder.

When asked, Simon said that it took 10 weeks including over 100 hours of programming to complete this scary scenario.

Pay careful attention to the last part of his show. He achieves some spectacular illusions.


If you like this, you should check out his Magical World of Upcoming iOS.
Posted by Dr. Z at 9:30 AM 3 comments: 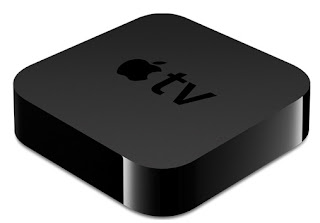 What does it take to project and interact with information on a large screen in a classroom? The typical answer to the projection AND interaction question has been the Interactive White Board (IWB). Special software is run on the computer and then the image is projected onto an special board.  The interactivity of the board my be controlled through a variety of technologies including InfraRed light, electromagnetic arrays, or even resistive touch-based materials.

In a previous posting, Poof, Your iPad Becomes an Interactive Whiteboard,  I discussed how you could create your own interactive board by hooking your iPad to a projector and then using Air Display and Ink2Go software to interact with your ipad screen.

NOW it's time to consider using a wireless option. A few months ago, a friend of mine - Bridgette Wagoner suggested that she was looking into interfacing a $100 Apple TV device (connected with the projectors already in the classroom) with an iPad to create a portable interactive slate for her classroom in Waverly-Shell Rock Community School District. Turned out that she needed to wait for the iOS 5 for this to work, but she has it running in her schools now.


Recently, Scott Meech wrote an article for EdReach entitled The iPad 2 and Apple TV . . .  Ed Tech Industry Killer?  He proposes this solution and then lists 11 reasons why it might be a useful application. I found it quite interesting and it looks like a view into the future.


What do you think?  Are you using this solution already?

How Gaming Makes a Difference in Your World (Ted Talks)

Gaming is much more than trying to shoot down Space Invaders or battling between alliances and hordes in Azeroth or teleport through Portals. Jane McGonigal believes that increased gaming can help solve the problems in the world. Stuart Brown explains the benefits and necessity of having fun to create a fully-developed person.  What do you think?  How does this apply to your concept of learning?


Dr. McGonigal has a vision for the future based upon the propagation of playing games. She has bases her future ideas on stories of the past. Conversely, her plans involve a future that provides opportunities that are now available due to today's technological opportunities.

The importance of play is apparent throughout society. Dr. Brown demonstrates how it is a necessary aspect of personal development for both human and non-human species.
How does this relate to gaming? What needs to be changed in your learning environment to begin to provide this sort of fun learning experience?

A Manifesto for Play, for Bulgaria and Beyond
Steve Keil
TEDxBG Talks in Sofia, Bulgaria

Steve Keil shares his ideas on how the whole culture of Bulgaria can be improved through allowing and pursuing play. Consider the culture he is describing where fun and play were squashed through years of communistic oppression.

Do you agree with his ideas for making change? What is he doing that is making a different world in the world? How does this relate to the messages that Stuart Brown is proposing?
Check out his http://playmanifesto.org to review his ideas.

Look for additional resources and add them to the comments below.  What can you find that will benefit your colleagues use in their understanding of our futures' possibilities?

How is Gaming Different for Boys and Girls? (TED Talks)

Brenda Laurel explores her research into designing games for girls.  She questions what games for girls need to contain and how they might be designed to benefit girls.

Do you agree with them?  How does this align with your experiences?  If you were a girl once, do these finding match your feelings?

This is a 1998 TED video. Does it still apply? Find updated information and include it in the comments section of this posting.

Ali really digs into the effect of today's classrooms on boys' engagement in learning. She
shares stats that show boys have 3 time the difficulties of girls in succeeding in the typical classroom. She advocates using gaming in schools to make learning relevant to boys' learning styles. She says that gaming is not the problem but a symptom of boys trying to make life relevant.

Ali identifies 3 reasons that school cultures are out of synch with boys' cultures:
It is a video that makes you rethink how learning should engage boys.
Posted by Dr. Z at 2:17 PM 3 comments:

We Will Miss You, Steve

One of our greatest visionaries, Steve Jobs, has died.

I didn't know how much I looked up to him until I heard that he had passed. I felt an incredible loss. Here was the leader who I have followed for over 3 decades . . . and he was gone. I cried.

I actually met Mr. Jobs once. It was in 1983, I think.  I had dinner with him as a matter of fact. He was at the CUE (Computer-Using Educators) conference in California to make a big announcement. There were 8 of us sitting at the dinner table and we engaged in the regular small talk. I think that was because he was saving the big stuff for after dinner.

When Steve walked up to the podium, he began to share with us his dreams. He told us about how he dreamed of the day when he would be able to talk with Aristotle through his computer. He dreamed of capturing the essence of Aristotle through his works and teachings and using that information to create a virtual intellectual likeness of the philosopher. This would allow students to actually discuss concepts with this ancient thinker.

Along with his Aristotelian dream, Jobs dreamed of having computers in classrooms for students to use. He wanted to enable learners by making computing accessible to all.

His big announcement for that evening was a step towards this end. He announced that over the next year, Apple Computer would be donating 1 Apple IIe computer to each and every school in California. It was called the 1 Apple per School program . . . and it actually happened. Each school in California received an Apple IIe computer. This was quite altruistic, but it had a marketing slant to it as well. Apple marketing had determined that if a school gets a computer the first year, they would purchase 5 the second year and typically outfit a computer lab with 15 computer the third year.  You might say that Steve Jobs was playing Johnny Appleseed as he seeded the landscape.

This anecdote happened almost 3 decades ago but it shows the vision that Steve Jobs nurtured. He had visions but he turned his visions into action. You can read all about the great things he accomplished somewhere else. Here I just want to remember him as a man who changed the world by making his ideas and dreams come to life.

I can only hope that I can follow in such footsteps.