Why do we need to know that?

NO self-respecting educator would allow students to cite Wikipedia in a research paper!

NO professional would try to cite Wikipedia in a refereed journal!

Why waste the time and effort to even consider how to cite it?

It's funny how the title of this posting will raise the dander of many an academic. It will cause them to respond exactly as the quotes above indicate. Many an academic will complain that Wikipedia is an indicator of how far our world has plummeted when they consider that a resource created "by the masses."  It is "the free encyclopedia that anyone can edit."

This reminds me of a little known fact that Dr. David Thornburg mentioned once in a presentation I had the good fortune to enjoy. He was addressing this very issue of Wikipedia being considered unreliable because it was created and maintained by people who were not christened as "experts" in the field. He pointed out that the first Oxford Dictionary had been compiled by 800 volunteer readers back in the mid-1800s.

But ask a room full of academics and educators about how many of them use Wikipedia and the only liars in the room will be the ones who don't have their hands raised.  Wikipedia is a WONDERFUL starting place for beginning research or getting familiar with a topic or even finding relevant references in the References and External Links at the end of each article.

Run a Google search on most any topic and there will be at least one Wikipedia reference in the first 10 links. Wikipedia is ubiquitous.  It is everywhere.

So what do you do if you want to refer to a definition in Wikipedia (not necessarily as an expert resource but as an example in a discussion) and you want to make an APA-appropriate citation?  Listen to Timothy McAdoo in the APA Style Blog.  His posting, How to Cite Wikipedia in APA Style, explains that it is quite similar to any other electronic citation with a couple of modifications to make it Wikipedia-specific:

The REST of the Story - Checkpoint Charlie

I was presenting at the Iowa Technology and Education Connection conference in Des Moines, Iowa. The great thing was that I got to meet a number of people who follow this blog. One of the interesting questions that I received was about the photo that I have in header above ^^^^.

Just thought that I would share "The Rest of the Story" with you.

This is from a photo of me in Berlin at CheckPoint Charlie in 2000. I was one of the professors who escorted a group of UNI students to visit schools in Poland and The Netherlands. We landed in Berlin so did a little exploring the streets. I had actually found a hat that fit my huge head and had Joe Smaldino take this photo.

I know that this posting had nothing to do with educational technology but just sounded like it might be of interest to some of you. 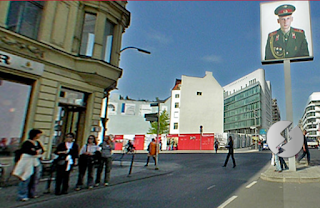 LifeHacker asked their readers to submit their favorite Free Apps. It was a simple process. They posted the challenge and the readers were to comment with their favorite apps. It appears that they had 484 comments with hundreds of suggestions. After a great deal of review, they whittled is down to:

The 61 Free Apps We are MOST Thankful For [sic]

Check them out. You will certainly find old friends, but you might be able to expand your toolbelt with some new apps you find.

Twitter and Facebook have DEFINITELY made an impact on Academia!!!!  APA Style now has defined how to cite them in a formal APA-formatted paper/article!

It's not even in the latest 6th edition of the APA Style Manual (you remember, the one with so many mistakes in its first printing that they had to call back all of those copies and have issued a reprint - the question is, how do you cite the second printing of the 6th edition?  =-)

Well, Chelsea Lee on the APA Style blog has provided guidance and examples for citing these social media sources. She says that these formats will work until more "definitive guidance is available." So I guess this means that she has received the blessing from the APA Oracles to share these rules.

How to Cite Twitter and Facebook, Part II: Reference List Entries and In-Text Citations
This posting refers to citing particular posts.  These posts need to reference both the source and the specific posting.  The examples are more complicated than I want to post here so I will leave you to click on the title link to see how they work.

I teach a Seminar at the University of Northern Iowa on Writing a Graduate Paper.  I find it humorous how paranoid students get when they have to write in APA format. It becomes a barrier to writing because they are afraid that they don't know everything there is to know about APA.

By the end of my class, I have tried to demystify APA and convince the students that the important part of their writing is what they say and how they organize their thoughts.  The APA format is only to ensure consistency between authors and it can be implemented (and refined) towards the end of the writing process.

Trying to format the plethora of sources available in the world today is a moving target and I take my hat off to the folks at APA.  It's genius to run a blog that can be used to channel recommendations about formatting sources between their editions that are published about every 6 years.  It's just that educators shouldn't take the format's importance to the point of squelching creativity and original thought.

This posting about referencing Facebook and Twitter is only a small part of the many suggestions available.

What is your opinion about APA and how it's importance in teaching writing in schools?