Using Social Media to Create Your PLN at ISTE 2010 (Updated) 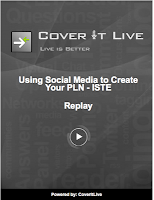 Here is a link to the CoverItLive backchannel discussion that we had in our ISTE Workshop. It will take you to Lois Lindell's blog.

We had an interesting workshop. 10 people attended. There were 3 IT people who were there to learn more about what their teachers were interested in doing.  I loved their perspectives. They said that their students and teachers were involved in social media and they wanted to learn more about the topic so that they could make more informed decisions.

I have been doing a lot of thinking about strategies for IT personnel and teachers to "Play Well Together." I will cover my ideas and observations in a later posting.

Anywho, Our workshop covered a great deal of topics. We began with an introduction into Personal Learning Networks and then reviewed a number of tools to use for developing their PLNs. Here is the wiki for our presentation.


DIIGO: We began with introducing Diigo. Most of the attendees had background in Delicious.com, but we wanted them to learn about the additional features that are offered in Diigo.  We had them download toolbars and then go on a Tagging Spree. They enjoyed how they could bookmark a site, tag it and write a description. It got really exciting to see the additional things we could do with Diigo. We could:
What's REALLY exciting is how the list can be viewed in a live webslide show.

RSS: We did something new here. We introduced RSS feed using Diigo and then explained what it did. This is the opposite of what we usually do, but I think that it worked.

iGoogle: We used iGoogle as the RSS Organizer (We decided to use the term, Organizer, instead of Aggregator.) Began with some videos of interviewed quotes from some of my students about how they see PLNs changing the way that their students do research.

Lois shared how to she uses Diigo to follow the journal research on specific topics. I love her process and she has some useful ideas about how to organize your search into an RSS feed that you can flod into  your iGoogle Page.

Finally, Lois and I tried something new which worked quite well.  We decided to "shut up" about half way through. We suggested that the participants should find things that were interesting to them and then let them work on their own. It went quite well, but we felt like third wheels.  I guess that is just part of the process of facilitating student-centered learning.

Using Social Media to Create Your PLN at ISTE 2010

What have you found to be a useful form of Social Media to support your PLN?